As a servicemember, I’ve worked in and around public diplomacy and what we call mil-to-mil operations in a number of countries, and invariably, there are elements of the civilian population involved in the planning and execution of these events.  Typically, those civilian participants are seasoned diplomats or representatives of large non-governmental organizations.

But on more tactical levels, I’ve been part of some of the most amazing experiences empowering young people at the grassroots level.

At an elementary school in Haiti, while we brought toothbrushes and water to the school, what happened afterwards made the biggest impact on us all.  An impromptu dance that literally swept us all up in the joy and simplicity of being a child with hope, regardless of the fact that their lives exist in the slums of Port-au-Prince and ours exist inside the borders of stable, developed countries.  At that moment, we were all just people.  That day, now more than 12 years behind me, is imprinted in my psyche forever as a life-changing event.

Similarly, at a girl’s secondary school in Kabul, we brought school supplies into a facility that had now power to the building, no glass in the windows and hosted multiple students at desks that here in the United States would sit only one student.  In those classrooms, we looked into the eyes of young girls who aspired to be presidents, diplomats, teachers and business owners, and they believed they would accomplish their dreams.

In both those deployments, command leadership briefed us frequently that changing a country happens from within, and that it takes a full generation to transform a culture.  That while diplomacy and nation building at the top levels of leadership are critical to setting the path for progress, reaching the populations who vote today and who will take the reigns of government tomorrow are equal if not more important missions.

My deploying years are behind me, and now I’m applying the lessons I learned in those experiences to managing programs that are working with young people around the world through People to People International.  One of those programs is Global Youth Forum.

In a time when we are all globally connected, why is this program culturally significant?

Global Youth Forum is nearly as long-standing as the organization itself.  The program’s mission is to assist in the global education of students from around the world.  It aligns directly with President Eisenhower’s founding principles for People to People International; to enhance understanding, exchange ideas and bring diverse people together to share experiences.

Today’s young people are more culturally aware than ever.  As a generation, they are more tolerant and more socially intelligent than any generation previous.  Issues like poverty, the impacts of the rapidly expanding human populations on resources, racial divisions and the effects of large-scale weather events on humans and the surfaces of the earth are less remote to them than they are even to the generation of their parents.  They have more knowledge at their fingertips that we ever dreamed possible.  But still, most young people live in culturally homogenous areas.

Global Youth Forum recruits and attracts a diverse group of students who share PTPI’s vision to cultivate engaged and knowledgeable citizen leaders.  We bring people ready to do rather than just observe through their device screens.

GYF 2019 hosted students from New Zealand, South Africa, Mongolia, Guatemala and over a dozen states in the US.  This year’s students identified as African-American, Hispanic, Asian-American, lower income, middle income and upper income, LGBT, high-achieving, troubled, college-bound and uncertain of their goals.  They arrived by car, van, plane and train.  But, when the doors opened, they became one cohesive unit almost immediately.

Students this year spent four days learning about the importance of preserving indigenous cultures, celebrating diversity and practicing diplomacy through a Model United Nations experience and an economic development summit.  But more important than the course work, was watching our students from around the world teach each other popular dances from their cultures in preparation for the closing gala or watching naturally assertive students step back and encourage other students to take the lead in presentations, so their experiences and opinions were heard.

Over the course of its lifetime, Global Youth Forum has influenced nearly 5,000 future leaders.  Most of those students attend GYF on a scholarship generously provided by our sponsors, donors and adult travelers.  If you’ve traveled with People to People, you helped fund one of the nearly 40 scholarships we provided to students attending GYF this year.  A number of generous donors also paid for the travel expenses for students needing financial assistance to get to Albuquerque.  The intent of the scholarships and sponsorships was to ensure we brought together a diverse group of students to learn not just from the instructors but also from each other, both formally and informally.  We are proud to have accomplished that goal this year.

Planning for the 2020 Global Youth Forum is already in progress.  Next year, we hope to have more countries represented and give away more scholarships than ever before.  You are the reason we continue to succeed in our mission to create a more peaceful world from the grassroots.  Every time you travel or donate to PTPI, you give a student the opportunity to be empowered to be an active force in creating and sustaining a more peaceful world.  On behalf of the nearly 60 students who completed Global Youth Forum 2019, thank you!

Popular posts from this blog 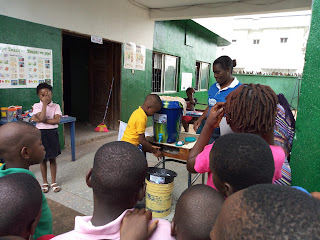 Private Grants the Route for Sustaining Chapter Projects   As Covid-19 took hold on the global economy, much of the regular revenue that sustains the chapter projects program at People to People International, as well as the revenue for many of the endowments and corporate giving programs that support PTPI has been significantly reduced or has been redirected to Covid-19 relief, affecting our ability to continue funding many of the very important projects around the globe.   Fortunately, some of the chapter projects quickly pivoted into Covid-19 relief work and qualified for private funding.   One of those projects is the ‘I Wash My Hands Project’ the Imo State, Nigeria, chapter has been engaged in for several years.   The project was initially established as a solution for reducing childhood mortality by improving hygiene practices.   “When handwashing facilities are both free of charge and made mandatory by community leaders, health outcomes are improved. Because safe w
Read more

Nepal Peace Chapter gives food aid to 61 Kathmandu families   COVID-19 has changed the world as we know it but it has not changed the spirit of kindness or our People to People members. Amidst the global pandemic, the People to People Nepal Chapter delivered food to those in need. The chapter members created food bags and delivered them to families in Kathmandu, Nepal.   There were 61 food bags and each contained: 10 kg of rice, 1 kg of lentil, 1 kg of sugar, 1 kg of salt, 1 liter of edible oil, 1 packet of tea and 1 piece of hand soap.   Chapter members distributed 61 food bags to 61 families affected by the COVID-19 pandemic. There were 305 people impacted by their food relief.   This incredible work is what People to People chapters are doing all over the world amidst the pandemic, taking risks themselves to help those in great need.
Read more

PTPI Togo Chapter creates partnership with Association for Visually Handicapped People   Throughout the COVID-19 Pandemic, People to People chapters around the world have been hard at work serving their communities and creating lasting relationships even amid such hardship.   The People to People Togo Chapter in Lome, Togo created partnership with the Association for Visually Handicapped People in Amadahome, Lome, Togo. This partnership began very recently when the PTPI Chapter President, Newlove Bobson Atiso and several other members visited the home.     They brought with them friendship and supplies to help during this difficult time in their country and around the world. They also got to know and introduced the chapter members and the organization of People to People International. It was a wonderful experience where a lasting partnership was created.   This chapter work is reflective of the highest values that People to People represents and is greatly appreciated and recognized
Read more